The European Central Bank (ECB) has today published its European payments statistics for 2015 on non-cash payments, which comprise indicators on access to and use of payment services and terminals by the public, as well as volumes and values of transactions processed through payment systems.

Statistics are published for each EU Member State, in addition to EU and euro area aggregates and comparative data.

The total number of non-cash payments in the EU, comprising all types of payment services, increased by 8.5% to 112.1 billion in 2015 compared with the previous year. Card payments accounted for 47% of all transactions, while credit transfers accounted for 26% and direct debits for 21%. 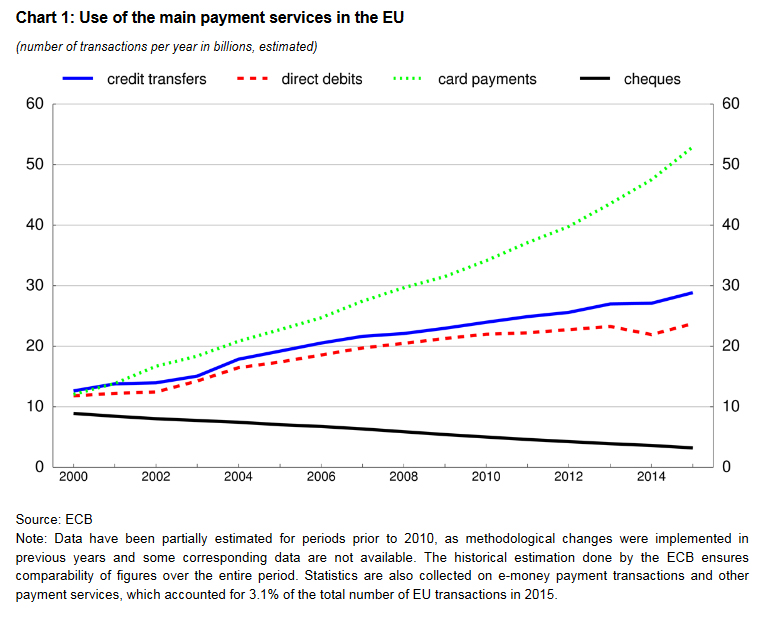 The number of cards with a payment function in the EU increased in 2015 by 1.8% to 781 million. With a total EU population of 510 million, this represented around 1.5 payment cards per EU inhabitant. The number of card transactions rose by 11.5% to 53.0 billion, with a total value of €2.6 trillion. This corresponds to an average value of around €49 per card transaction. Chart 1 below shows the use of the main payment services from 2000 to 2015.

The relative importance of each of the main payment services continued to vary widely across EU countries in 2015 (see Annex). In 2015, the total number of automatic teller machines (ATMs) in the EU decreased by 1.4% to 0.45 million, while the number of point of sale (POS) terminals increased by 6.5% to 11.2 million.

Retail payment systems in the EU handle mainly payments that are made by the public, with a relatively low value, high volume, and limited time-criticality. In 2015, 45 retail payment systems existed within the EU as a whole. During the year, almost 51 billion transactions were processed by those systems with an amount of €41.1 trillion. 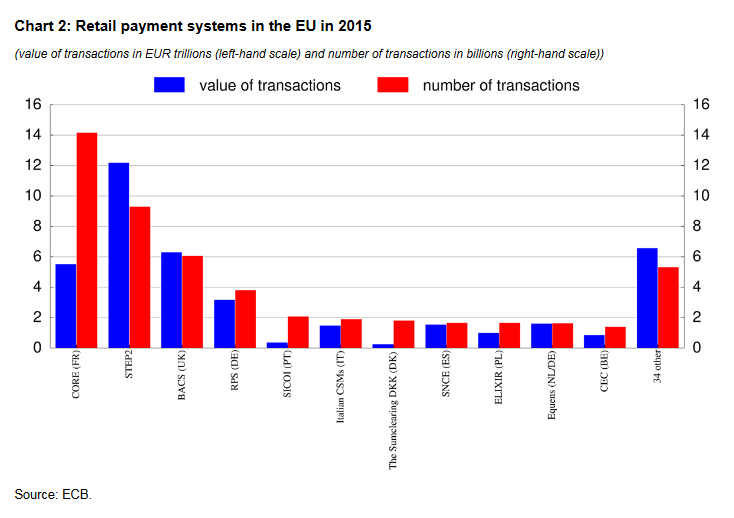 Large-value payment systems (LVPSs) are designed primarily to process urgent or large-value interbank payments, but some of them also settle a large number of retail payments. During 2015, 12 systems settled 773 million payments with a total value of €715 trillion in the EU. 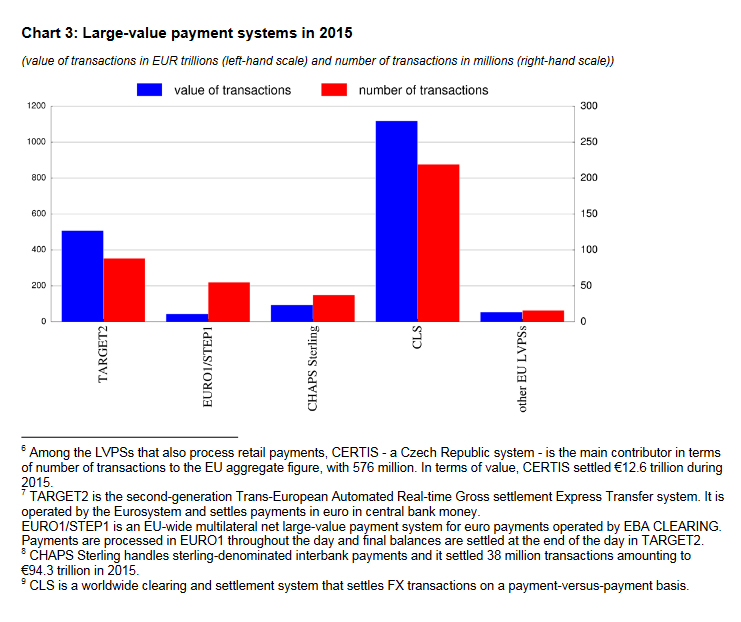 The two main LVPSs in the euro area (TARGET2 and EURO1/STEP1) settled 144 million transactions amounting to €553 trillion in 2015, i.e. 77% of the total value. In the non-euro area EU countries, CHAPS Sterling in the United Kingdom is the largest LVPS in terms of value and number of transactions.

Outside the EU, Continuous Linked Settlement (CLS) is the most important large value payment system processing, inter alia, euro and other EU currencies. CLS (all currencies) settled 219 million transactions with a value of €1119 trillion in 2015. Chart 3 below shows the number and value of transactions processed by LVPSs in 2015.