The European Commission says that the caps on the interchange fees retailers pay to process debit and credit card transactions have helped push down prices.

The EC published a report on the impact of the Interchange Fees Regulation (“IFR”) for card-based payment transactions. In line with the requirements on the IFR itself, it has been sent to the European Parliament and the Council.

The report concludes that the main objectives of the Regulation have been achieved, as interchange fees for consumer cards have decreased, leading to reduced merchants’ charges for card payments, and ultimately resulting in improved services to consumers and lower consumer prices.

Furthermore, market integration has improved through the increased use by merchants of acquirers (banks servicing merchants) located in other Member States (cross-border acquiring services) and more cross-border card transactions. 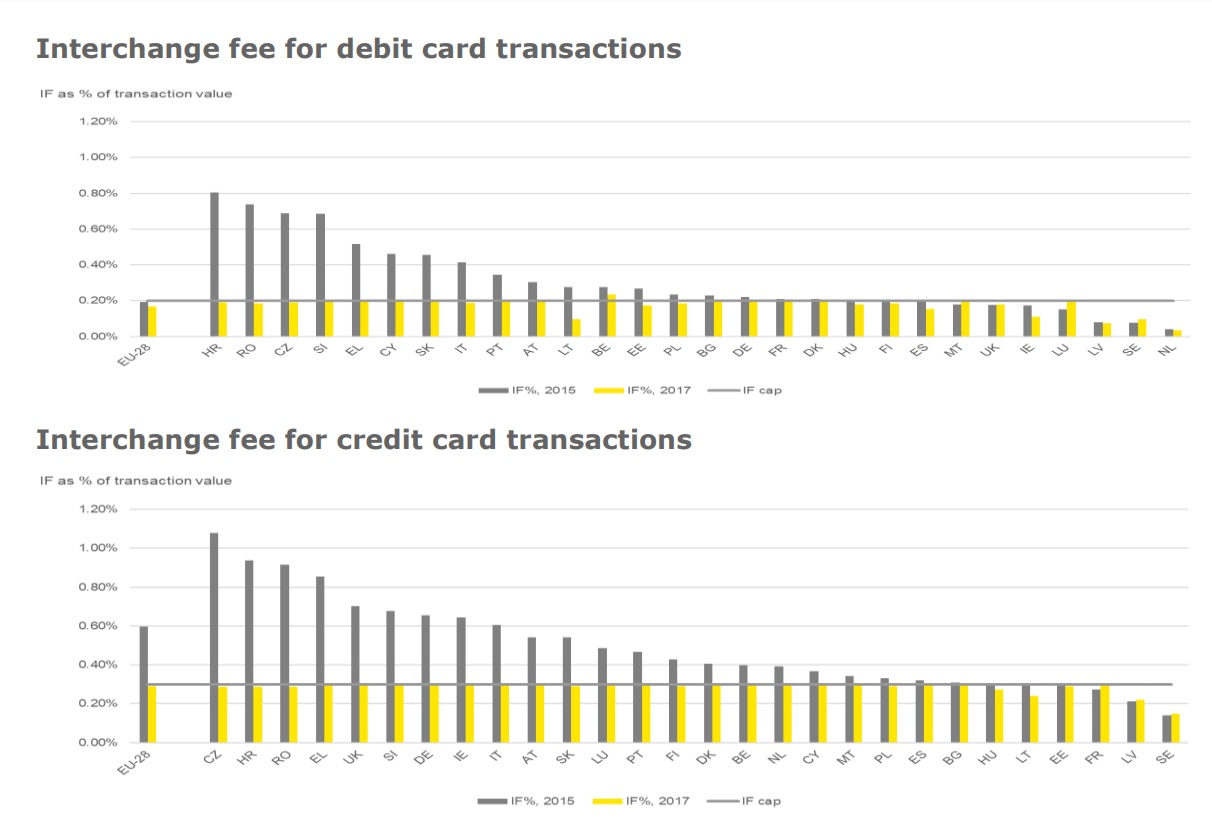 However, further monitoring and reinforced data gathering are necessary in some areas, including those where only limited time has elapsed since the Regulation entered into force. Given the positive impact of the IFR and the need for more time to see the full effects of the Regulation, the report is not accompanied by a revision legislative proposal.

The main objectives of the IFR, which entered into force in 2015, were to address interchange fees for cards and card-based payment transactions, which were highly diversified, elevated and non-transparent.

These fees represented an obstacle to Single Market integration and created distortions of competition, including higher costs for retailers and consumers. To this effect, the IFR caps interchange fees for consumer cards, introduces business rules and prohibits practices that create market barriers, such as territorial restrictions or the prevention of choice of payment brand or payment application by merchants and consumers.

The Commission’s report builds on a comprehensive study on the application of the IFR, commissioned by the Commission to an external contractor and published on 11 March 2020. It further relies on extensive additional input provided by stakeholders including major card schemes, retailers and payment service providers including business associations, consumers and national competent authorities.

In April 2015, the European Parliament and Council adopted Regulation (EU) 2015/751 on interchange fees for card-based transactions. Its provisions became applicable between 2015 and 2016. The separation of card schemes from entities processing card transactions was specified by Regulatory Technical Standards, which entered into force on 7 February 2018.

The main objectives of the Regulation are the creation of a single market for card payments and the prevention of competition restrictions, including the inability of merchants to negotiate fees below the interchange fees levels (floor effect) resulting in higher costs for retailers and consumers. The IFR aims at promoting offline, online and mobile card payments, in line with the principle of technological neutrality.

Article 17 of the IFR requires the Commission to submit to the European Parliament and the Council a report on its application.

As a follow-up to the report, the Commission is also planning a public hearing with stakeholders on 7 December 2020. More information on this will follow on DG Competition’s website

The final report on the impact of the Interchange Fees Regulation is available here.