Consumer use in the Philippines (53.5 percent) and Malaysia (55.6 percent) top the region with the highest year-on-year growth in mobile shopping, recording increases of 12.6 percent and 10.1 percent respectively. 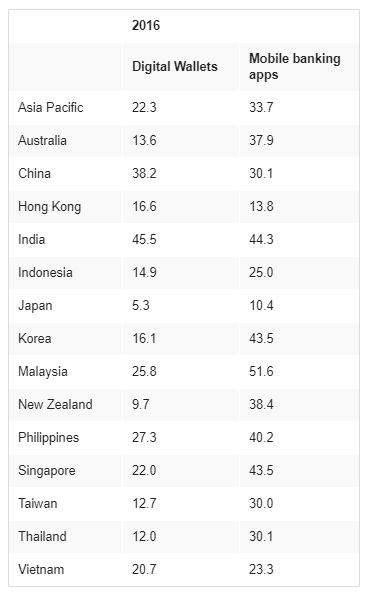 Meanwhile, consumers in India (75.8 percent) retain their crown as the region’s top mobile shoppers for the second consecutive year, having made at least one purchase through their mobile phones in the three months preceding the survey. China’s mobile shoppers remain a close second at 71.4 percent, followed by Thailand at 65 percent. On the flipside, more advanced markets like Japan (31 percent), Australia (26 percent) and New Zealand (26 percent) are keeping their mobile purse strings tight.

Asia Pacific’s penchant for mobile shopping has also fueled a steady increase in digital wallet adoption, with more than one in five consumers (22.3 percent) using such payment methods. The region’s consumers are also embracing QR code payments. Over one in ten consumers use QR code payments with the most avid users hailing from China (42.6 percent) by a wide margin.

“Consumers in many of Asia Pacific’s emerging markets are mobile-first users, having leapfrogged the traditional payment evolution. Their governments are making significant efforts to push the development of the e- and m-commerce landscape as well as its supporting infrastructure, which has in part contributed to the growth we’ve seen in the latest survey results,” comments Benjamin Gilbey, Senior Vice President, Digital Payments and Labs, Asia Pacific, Mastercard.

“Today’s consumers have shifted from simply being one-device users to one-app users, as they demand more seamless payment experiences. This calls for greater collaboration between public and private sectors and industry players, to facilitate interoperability among the plethora of payment options available today.

Recent progress made in this direction, such as the standardizing of QR-based payments in India and Thailand, has been encouraging. We see many opportunities for further growth and remain committed to working with industry partners in enabling commerce for every device,” notes Gilbey.