The harsh realities of the current state of cybersecurity are made starkly apparent by the seemingly endless reports of major data breaches, which continue unabated despite consistent increases in IT security spending.

This ongoing game of cat-and-mouse suggests that the tactics, sophistication and motivation are helping global attackers stay at least one step ahead of their often overwhelmed and beleaguered defenders. The obvious – or what should be obvious – question is whether the cyber defenses that are being deployed today need to be re-examined for overall effectiveness and recalibrated.

As with past reports, this year’s Thales Global Data Threat Report showcases a mix of good and bad news. From the glass-half-full perspective, most respondents plan to increase their spending on security, for the fourth consecutive year: 78% of the 1,200 organizations polled plan in increasing IT security spending in 2018, including nearly 86% of US organizations, up from 73% globally, in 2017. 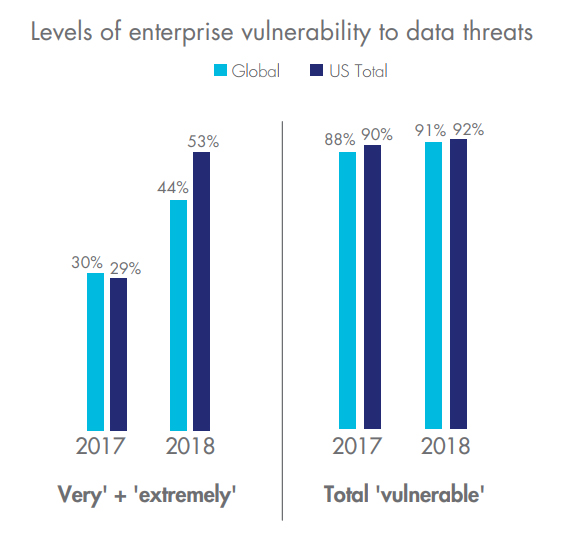 In past reports, compliance has been the primary driver for setting security spending priorities. That changed this year, with the fear of financial penalties from data breaches taking over the top spot, again possibly reflecting the growing number of costly, high profile attacks.

The bad news is that rates of successful breaches have reached an all-time high for both mid-sized and enterprise class organizations, with more than two-thirds (67%) of global organizations and nearly

three fourths (71%) in the US having been breached at some point in the past.

As we compare this year’s data to that from past surveys, while the numbers may change, the storylines remain essentially the same. We are spending more on security, more respondents view compliance as very effective at preventing data breaches, yet the number of breaches continues to rise.

One notable – and encouraging – change in this year’s data was that the perceived effectiveness of securing data at rest (77% globally) surpassed network security (75%) for the first time. At the same time, endpoint security ranked dead last in terms of effectiveness once again, yet has the highest planned spending both globally (57%) and in the US (65%) – a stunning disconnect.

Conversely, plans for spending on securing data at rest is at the bottom of this list globally (40%) and in the US (44%). In other words, the spending outlook is brightest for tools that we have identified as least effective, and vice-versa. Clearly, more work needs to be done to better align perceptions of effectiveness with the resources committed to support our goals.

Yet, implemented improperly, data security can be fraught with complexity, and the popularity of hybrid, distributed systems and mobility have certainly contributed to the challenges of deploying data security more broadly. Thus, it is not wholly surprising that complexity –or at least the perception that data security is complex – remains the top barrier to data security in this year’s report (43% globally, 44% US), though concerns about performance and business process impact (42% globally, 46% US) have closed the gap considerably from last year.