At first glance, the credit card market looks healthy. In 2018, the average return on assets (ROA) for credit card issuers was 3.8%, more than twice the average ROA of US banks (figure 1). Credit cards make up a sizable chunk of payment volumes – nearly $4 trillion in 2018 in the US alone.

They are also used widely for a variety of digital payments, the fastest growing payments area. This growth of credit cards has come at the expense of cash-based transactions – according to a new Deloitte report.

For instance, the share of cash transactions declined from 31% in 2016 to 26% in 2018, while credit cards accounted for 23% in 2018, up from 18% in 2016. But there could be challenges ahead. While the customer value proposition – convenience, the ability to purchase high-ticket items, and earn generous rewards – has largely been the same over the last decade, industry profitability has been declining. The average ROA dropped from 5.4% in 2011 to 3.8% in 2018. 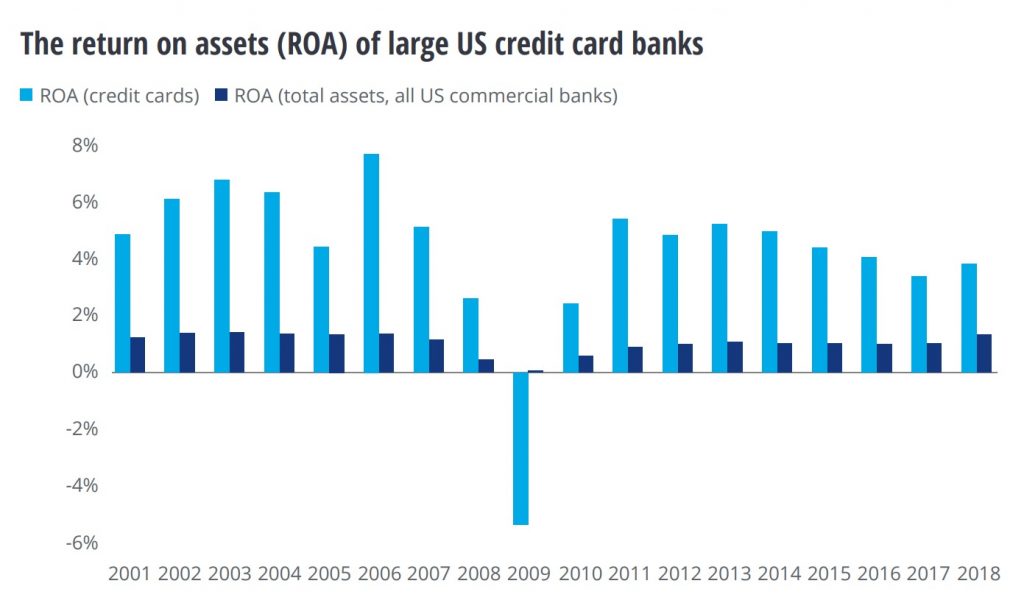 More troubling, this decline has come despite favourable interest rates on credit card products and benign credit quality in recent years. Average interest rates on credit card plans rose from 12.8% in 2011 to 16.8% (on accounts assessed interest) by the end of 2018, while chargeoff rates (seasonally adjusted) declined to 3.6% in 2018 (compared with 4.6% at the end of 2011).

While regulations, such as the CARD Act in 2009, may have played a role in the decline in profitability, a major contributing factor is the excessive reliance on rewards to attract and retain customers. 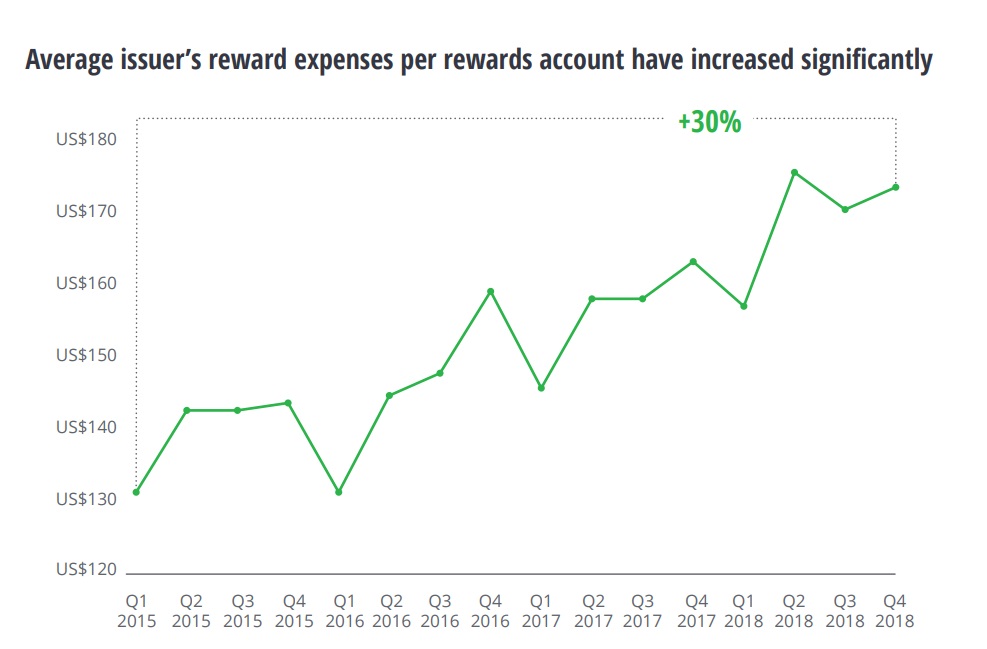 In 2018, consumers made at least half of their credit card purchases with rewards cards, which is why costs associated with rewards have shot up significantly. According to the Consumer Financial Protection Bureau (CFPB), the average issuer rewards expense per rewards card increased from $139 in 2015 to $167 in 2018.

As a result, issuers have reduced the number of rewards cards they issue, with the share of rewards cards now down to 60% of all new cards issued. But the reality is that consumers have now become accustomed to generous rewards.

According to a recent Deloitte Center for Financial Services survey, nearly three-quarters of consumers surveyed (who prefer credit cards over other instruments) say that rewards, discounts, and other offers are the most important reason for using credit cards.

This finding is consistent with other studies as well. In addition, one-quarter of consumers surveyed are willing to switch their credit card provider over the next two years to obtain better rewards elsewhere.

In particular, younger consumers – 34% of Gen Z and millennials – are even more likely to switch. This highlights how strong an influence rewards have on consumers’ choice and use of credit cards.

Clearly, credit card issuers cannot completely eliminate rewards, but they have to become smarter about them or find other value-added offerings to boost loyalty. 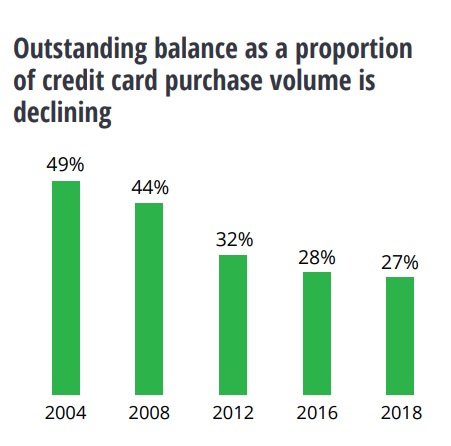 Consumer behaviour has also changed regarding credit. According to The Nilson Report, outstanding credit as a proportion of total credit card spending has been steadily declining over the past 15 years.

Clearly, if consumers use credit less and less, it will negatively impact the interest income component of credit card revenues. Cumulatively, these factors clearly show that multiple challenges loom for the credit card business: the growth of digital payments, changing consumer behaviours, the threat from big techs and nontraditional players, and the rise of faster payments.

Major card issuers are realizing the magnitude of these challenges and are beginning to respond. For instance, credit card issuers have started offering instalment loans as an additional financing choice for their customers.

Potentially, this POS solution could go beyond the physical card itself and be incorporated into digital wallets and QR codes. But card issuers can do more to elevate their game.

Issuers should view the challenges as a chance to redesign the credit card value proposition and their role in consumers’ lives for the digital era.