Could CBDC push shadow economy further into the darkness of crypto?

If central bank continue to push CBDC and move towards digital cash it is likely to force a shadow economy worth trillions of dollars to recede further into the darkness.

A big issue for governments and central banks then is the extent to which it’s already going there – or whether the latest explosion in cryptocurrency values, for example, is at least partly pricing its imminent arrival – writes Mike Dolan, editor, finance and markets, Reuters.

Monetary authorities from Beijing to Frankfurt have over the past year accelerated plans for legal tender in digital format, in part to keep pace with the explosion of private sector crypto-coins and online payment systems of recent years. The plethora of designs and concepts being bandied about so far make it difficult to get a clear picture of what will emerge.

What seems certain is that move to digital currency and CBDC sounds the death knell of physical notes and coins as we know it – a hitherto slow decline catalysed by social distancing during the pandemic. And it may not be that far off – China is already piloting versions and the European Central Bank expects to see a digital euro within four years.

But if the end of physical cash is nigh, then the people or activities most dependent on tangible banknotes – which effectively ensure the anonymity of the holders and transactions in them – will have to adapt or find another way to do business.

The most obvious users of hard cash – as opposed to electronic money directed between bank accounts within the existing banking system – operate in the what the International Monetary Fund dubs “the shadow economy”.

For the most part, this ecosystem operates to avoid taxation, regulation and oversight and can involve anything from households using notes to pay cleaners or builders to avoid value-added or employment taxes right up to organised crime and drug-running or even terror financing.

But the scale of this shadow economy is enormous. 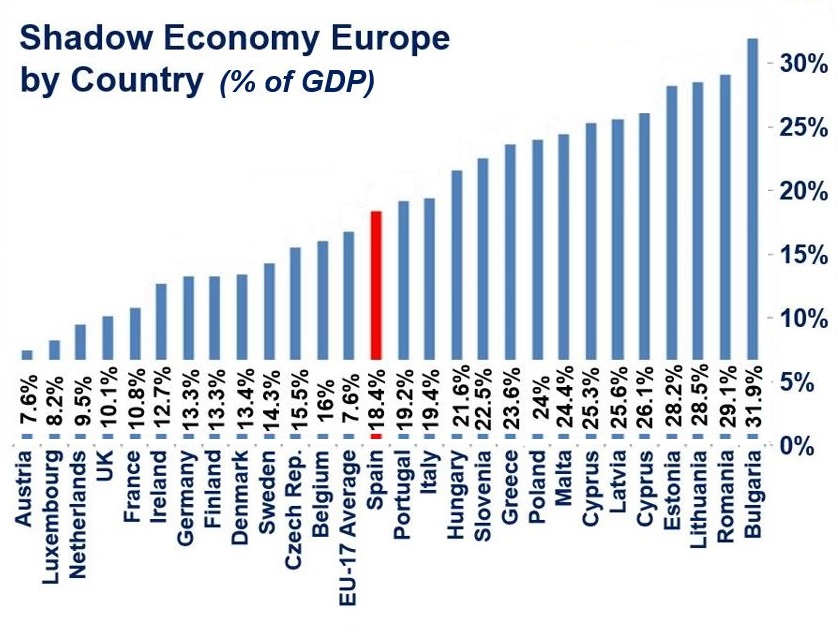 In a working paper published shortly before the COVID-19 shock, IMF economists estimated the shadow economy in Europe’s major economies could be as high as 20% of gross domestic product – for example – and up to 35% in some emerging European economies.

For the euro zone alone, that could amount to more than 2 trillion euros – almost twice the 1.2 trillion euros of banknotes in circulation and, curiously, still larger than the $1.5 trillion market cap of all known cryptocurrencies.

The end of cash

Cash won’t vanish overnight of course, even when CBDC is launched commercially. And presumably not all the shadow economy will migrate into the nether reaches of crypto world. In fact, the IMF cites research that greater use of simple electronic payments alone cuts the shadow economy significantly.

But assuming governments will not want to encourage activity in the shadows – not least due the loss of badly needed tax revenues in the years ahead – design of new CBDCs may have to be significantly influenced by this.

Much of the attention in Europe right now centres on a digital euro being a zero-yielding deposit directly with the ECB – a direct liability for the central bank in the same way banknotes are but stoking financial stability fears by obviating the need for risk-averse savers to hold commercial bank deposits.

To counter that, ECB board member Fabio Panetta and the ECB’s Director General of Market Infrastructures and Payments Ulrich Bindseil proposed limiting those “Tier One” deposits to just households and up to a maximum of 3,000 euros – effectively penalising holdings in excess of that, and those held by companies or investors, with deeply negative interest rates.

What’s more, Panetta added last week that in the event of a banking crisis those “Tier Two” negative rates may need to be in excess of 2 or 3 percent to avoid runs on commercial bank deposits to CBDCs.

But what’s highly unlikely is anyone operating within the shadow economy and keen to avoid taxes and/or policing will want to open a visible and traceable account at the central bank.

That’s why some economists think CBDCs should be issued only as digital tokens, aping banknotes in digital form but held privately in digital wallets much like cryptocurrencies are now.

Yet, even as with the main cryptocurrency bitcoin, that movement of tokens from wallet to wallet can be traced to some degree. And it’s hard to imagine legal tender tokens being relied on 100% for anonymity.

In a rebuke of CBDC plans to date that they claim risk a “gigantic flop”, economists Peter Bofinger and Thomas Haas questioned both deposit and token ideas in favour of a “store of value” unit that could back private online payment systems such as Facebook’s proposed Libra/Diem with legal tender and prevent them spinning out of the standing system into crypto and beyond.

They also claim that the idea of limitless and completely anonymous CBDC tokens simply won’t fly with anti-money laundering regulations.

But Metlife Investment Management strategists Alexander Villacampa and Jun Jiang reckon that while central banks now need CBDCs to wrestle control of monetary systems from the crypto world and Big Tech, a token is only logical way to go.

“Without a CBDC token, central banks may actually drive individuals into cryptocurrencies, which is unlikely a desired outcome.”

The post Could CBDC push shadow economy further into the darkness of crypto? appeared first on Payments Cards & Mobile.