Contactless payments are on the rise. Across all markets that have reached a critical mass consumers are starting to understand the value of Tap and Go payments. In the UK though the contactless payment market via traditional cards and through mobile devices is richer than most others. 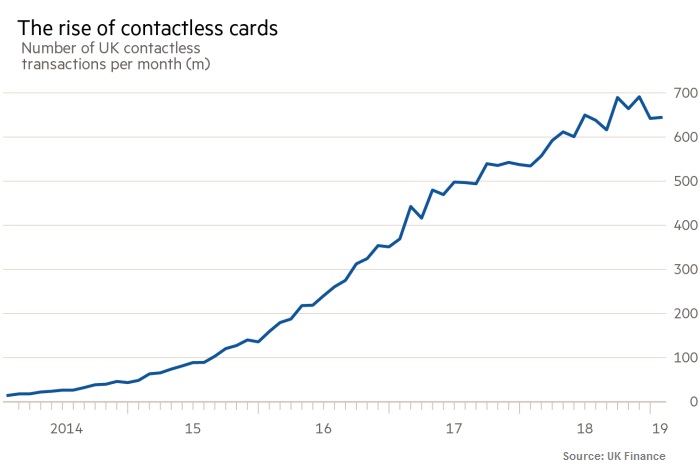 The latest monthly figures for contactless transactions, published by UK Finance, were 20.6% up on February last year. A similar rise was registered for the value of transactions, which jumped by 19.8% to £5.9 billion compared with February 2018.

The upward trend is rising in the medium term, but the February figures are slightly lower than those for December. Some believe the growth in contactless will fall off as people get used to using their smartphones to make payments and other financial tasks.

UK Finance, which represents banks and other financial services providers, thinks the rise will continue for a lot longer yet and predicts that 36% of all payments will be made via contactless cards by 2027, up from 15% in 2017.

The great majority of contactless payments — 85% is spent via debit cards. The rise in debit card usage has also come alongside a fall in the use of cash to make payments, with debit cards overtaking cash for the first time in 2017 as the most frequently used means of payment.

Debit card usage is expected to grow faster than any other payment method over the next decade. UK Finance noted this year that there had been an increase in credit card use, but the slowing growth in outstanding balances suggested consumers were using credit cards for day-to-day spending rather than borrowing.