Such is the fervour around virtual currencies that barely a day goes by without some form of news or announcement about the growth and threat of digital currencies but what is the reality behind the scaremongering? And how much of a threat or opportunity is the growth of these new forms of digital money? 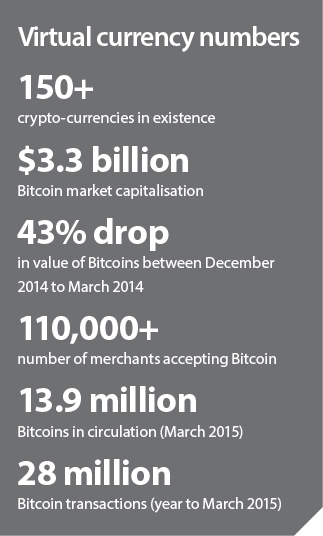 Foundation was extolling the virtues of a new form of currency that allowed users to be totally anonymous and was increasingly being favoured by individuals at the shadier end of commerce – from drug dealing to money laundering and prostitution. Understandably, given the audience at the event a number of delegates were left a little perplexed as to the relevance of the speaker.

Given the background to the take up of Bitcoin, among other virtual currencies, it would be fair to say that cryptocurrencies have suffered from something of an image problem. An image problem that continues to persist with the seemingly daily news of Bitcoin exchange hacks and subsequent closures and frauds, alongside the continued use of virtual currencies among criminal groups taking advantage of the presumed anonymity they offer.

However, in spite of the continued dismissal of virtual currencies by mainstream commerce and much of the payment industry, the far-reaching implications of a successful digital currency with the potential to open the doors to genuine cross-border trade at lower cost, and without the risk of foreign exchange fluctuations, are increasingly being backed up by commercial reality.

Speaking to Payments Cards & Mobile, Tony Gallippi, founder of BitPay, a merchant acquirer for merchants that want to accept Bitcoin, said that the company already has more than 52,000 legitimate merchants on their books since they launched in 2011 – a little over half the global market of the just over 100,000 merchants that currently accept Bitcoin.

“When we started there was a lack of tools for merchants to accept Bitcoin. We felt there was a good value proposition – lower risk and lower cost because of the lack of interchange fees, as well the ability to take a payment from anywhere. So we built a payment gateway for merchants, along with full settlement and processing abilities. The business case was proven pretty quickly – within 18 months we had signed up more than 1200 businesses to allow them to take Bitcoin as payment from their customers,” explained Gallippi.

While there are an ever-growing number of other digital currencies in existence (see box), Bitcoin currently accounts for around 95 per cent of all digital currency transactions. Transaction volumes across the Bitcoin network doubled in 2014 – a rate of growth is expected to continue in 2015, making virtual currencies an increasingly viable means of payment.

The majority of merchants that accept Bitcoin operate online, often selling digital goods. Increasingly however, big name brands are offering Bitcoin as a means of payment – Microsoft started accepting Bitcoin payments from customers buying apps, games and videos from online stores, while Japanese retail conglomerate Rakuten announced at the MPE event in Berlin this year that it is expecting the company will start accepting Bitcoin from retail customers by the Spring of this year.

There is still some way to go before virtual currencies become a genuine threat to standard forms of electronic payment. As Gallippi explains, “The number of transactions across the Bitcoin network currently is equivalent to about one per second, this compares to seven transactions per second with Western Union and around 110 with PayPal.” Compared to the volumes of transactions processed through Visa and MasterCard then, Bitcoin is a drop in the payment ocean.

As with other forms of advanced payment, the challenge for virtual currencies is to drive adoption when, from a consumer point of view, existing forms of (mainly card-based) payments work satisfactorily. A point that, in the case of virtual currencies, is compounded by the perception of them both as complex and at the margins of mainstream commerce.

Vaughan Collie, partner at payment industry consultancy Accourt explains, “There’s no doubt that there are clear advantages to the merchant, but for crypto-currencies to achieve ubiquity is going to require a number of elements to come together, not least of which is much more effective regulatory scrutiny within a yet to be created set of regulatory frameworks, and it’s not clear how these frameworks would be created and ultimately come together to enable full realization of Bitcoin’s perceived global potential.”

More coordinated oversight of digital currencies is a crucial aspect if they are to gain widespread adoption, and not purely because of market perception. As Collie added, “If there were more effective regulation of digital currencies, it’s highly likely this would contribute to a large proportion of the shadier elements that have so notoriously made use of them, being forced elsewhere.”

An outcome that would not only help improve the image of digital currencies but would also ensure greater trust in them as units of real, rather than virtual, value and help to reduce the extreme volatility that the likes of Bitcoin have suffered in recent months. Bitcoin values for example plummeted from over $370 per Bitcoin in November 2014 to around $250 by the beginning of March this year.

The potential for mass take-up of alternative currencies, however, is nothing short of a budding headache for both regulators and consumers. With no one yet sure what will happen once the magic number of 21 million Bitcoins in circulation is reached – the maximum number permitted in the blockchain – and with a currency that is not centrally managed by any one regulator so that the money supply could be eased in a recession, as central banks in the US, UK and Japan have been doing since 2008, a return to a virtual gold standard currency would have far-reaching consequences.

In light of the increasingly global, cross-border nature of business and particularly of online commerce, however, the gradual legitimization of alternative currencies such as Bitcoin marks the beginning of the transformation of money that has up to now been defined along strictly national lines.

The Bank of England’s announcement at the end of February that it is reviewing options for launching its own digital currency is perhaps a sign of just how seriously regulators and central banks perceive the challenge to their own currencies. Another commentator even remarked that a virtual currency could be the solution for Greece if it were to leave the Eurozone.

Ultimately it could be emerging markets that become the driving force in take up of virtual currencies, given the right conditions. Currently the majority of Bitcoin activity is centred in the US and Europe, but with Africa’s success in creating a viable mobile payment marketplace as a benchmark, the continent’s lack of legacy payment and banking infrastructure could present a significant opportunity for a regulator with the right approach to currency regulation.

There are significant barriers to overcome, however, before this is likely to be a reality in Africa or elsewhere. While the benefits to merchants are more obvious, changing consumer behaviour sufficiently that digital currencies are viewed as viable replacements for existing forms of payment is more complex, and will take much longer, particularly in the wake of high profile scandals involving theft and Bitcoin fraud.

At the same time, as the number of digital currency transactions grows, along with the number of merchants accepting them, crypto-currencies such as Bitcoin are becoming less and less virtual and more like traditional currency. A fact that is also being accelerated by the introduction of (albeit only a small number) of Bitcoin ATMs in the US. With no accepted form of storage of Bitcoins or any other digital currency yet available, consumers are exposed to the risk of theft of the Bitcoins they have stored on their PC or other device. A dilemma that will need to be resolved to drive mass take up and ensure consumers of the safety of holding large amounts of digital currency.

Unsurprisingly, given the current climate of fintech fever, there are a number of solutions in development already. UK digital currency bank start-up Ripula.co.uk is one of these. The company’s founder, Oliver Mitchell, is currently in talks with investors in Silicon Valley to fund expansion and marketing of a cloud-based platform that would effectively act as a digital bank, holding accounts for customers to store and trade any digital currency.

There’s a long, long way to go before any virtual currency represents a serious threat to the existence of any of the world’s national currencies, or even a serious alternative to the Visa, MasterCard scheme-dominated consumer payment system. What is more certain, however, is that the continued growth in use and acceptance of crypto-currencies will be one more innovation that will contribute to consumer adoption of forms of electronic money and payment and to another step away from cash. Small wonder then that western regulators are scratching their heads in response.