97% of merchants are already looking to leverage PSD2

Last month, the European Banking Authority (EBA) announced an 18-month delay to the implementation of Strong Customer Authentication (SCA). However, the delay to PSD2 – which follows UK FCA’s own delay in August – seems to have come too late to harm merchants’ appetite for Open Banking Solutions. 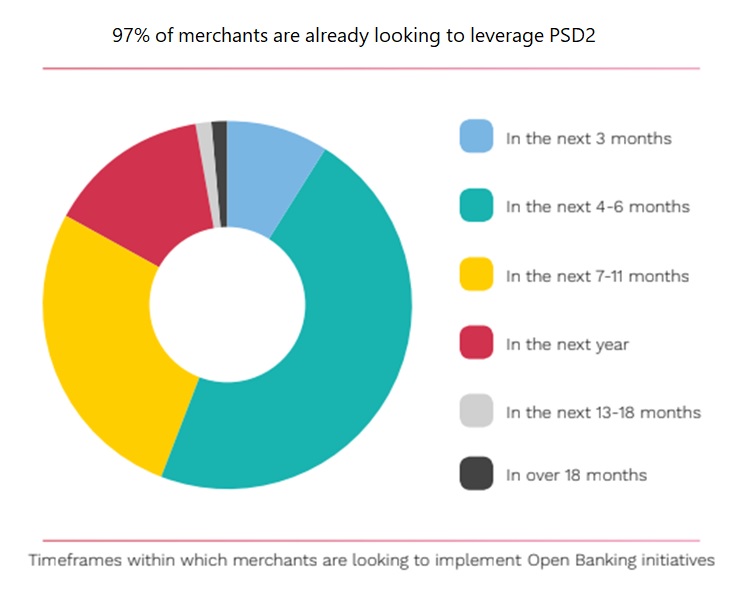 Having already implemented the necessary technical fixes, many are now turning their focus from SCA compliance activities to the benefits that PSD2 can offer. Could this mean that businesses are finally turning to the capabilities of Open Banking Payment methods?

The Open Banking World Series report from Nuapay, suggests that merchants are emphatically ready to implement Open Banking initiatives. 79% of the 100 senior finance, payments and product professionals from industries including commercial aviation, supermarket retail and the subscription economy surveyed, said they were certain their company is planning to use Open Banking services and are ready to do so.

And data from the OBIE backs this up. After languishing at only a few thousand transactions per month until the start of the year, PIS payments have started accelerating – growing at 70% per month for the last six month.  In August alone they grew 141% to more than 450,000 transactions. While this remains small in the scheme of total online payments, it demonstrates that Open Banking payments are now being used at scale in live environments.

This means for users making Open Banking payments on their smartphone, the payment will automatically open your mobile banking App and ask you to authenticate the transaction with your biometrics, without any data entry needed whatsoever.

Of course, this is still only the start.  While more and more merchants are starting to adopt Open Banking payments, 76% of them believe implementing Open Banking will be a challenge.

However, the survey found that rather than viewing Open Banking as a compliance exercise, merchants see it as an opportunity to compete and innovate. 86% of the merchants that are rolling out Open Banking or are considering its use say they are ‘very’ or ‘somewhat’ confident that they will realise the opportunities of Open Banking in their organisations. Indeed, to date, there are more than 80 third party providers registered with the FCA to provide payment services or data capabilities.

The post 97% of merchants are already looking to leverage PSD2 appeared first on Payments Cards & Mobile.