The Accenture 2016 North America Consumer Digital Payments Survey – is based on a survey of more than 4,000 smartphone users in the United States and Canada, and is the most recent report in Accenture’s multi-year research on consumer attitudes about how they want to pay now and in the future.

60% of consumers in North America use cash at least weekly to make purchases at a merchant location, down seven percentage points from 2015 – the most significant decline in use of traditional payment methods over the past year, according to a new report from Accenture.

Awareness of mobile payments increased four percentage points from last year to 56%, however the regular 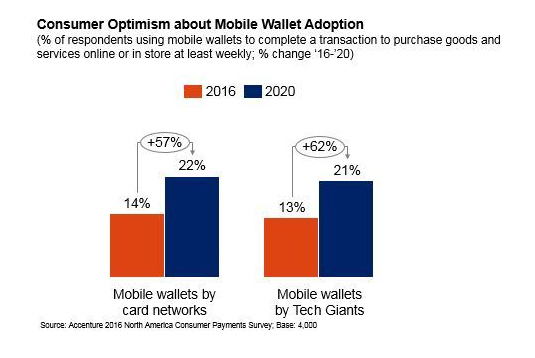 use of mobile payments remains flat at 19%.

The survey found that even with the decline in cash use, cash and plastic continue to be the most common payment methods. North American consumers’ use of debit cards for payments in merchant locations has remained consistent at 58%, while credit card usage was up three percentage points from the previous year to 53% in 2016.

“We are seeing a gradual increase in consumer awareness of mobile phone payments options; however, adoption has remained flat over the past few years,” said Robert Flynn, managing director of Accenture Payments in North America.

“Consumers are content to use cash and plastic for their everyday transactions, and while the use of cash is declining overall, it is the most commonly used form of payment – and consumers expect it to remain so in 2020. To shift consumers’ payment behaviors will take more than just providing another ‘me too’ mobile payments option; leading merchants will identify and provide next-generation, value-added services.”

While the use of mobile payments at merchant locations remains flat according to the survey, other digital payments are on the rise – a trend that consumers expect to continue. Since 2014, consumers’ use of PayPal has increased four percentage points to 18% in 2016.

Consumers expressed optimism about mobile wallet adoption in the future, expecting a nearly 60% increase in 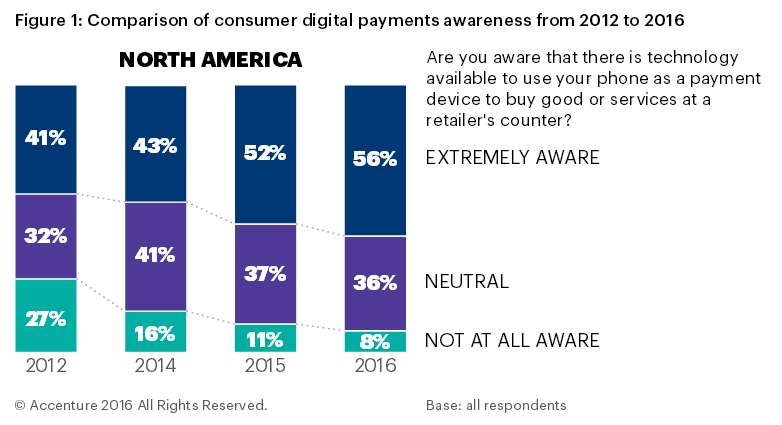 “The existing payments system isn’t broken, which is why consumers are not making a mass-move to mobile payments adoption – the incentives are not there yet,” continues Michael Abbott, managing director of Accenture Digital, Financial Services, North America lead.

The survey identified barriers to consumer adoption of mobile payments, which, if addressed, can provide first-

movers with a significant advantage.

Of the nearly two-thirds (64%) of consumers who have never used their mobile phone as a payment vehicle at a merchant location, more than one-third (37%) said they have not done so because they believe cash and plastic are fine for their payments needs; while nearly one-in-five prefer not to register payments credentials into their mobile phone (21%) or are concerned that unauthorized transactions may happen (19%).

Consumers trust traditional payments providers the most and are largely satisfied with digital payments transactions; however, there are no clear winners yet.

Of those consumers who have used mobile payments apps in store, consumers most frequently used their bank’s mobile app (26%), and 76% expressed satisfaction with this experience.

Millennials and Mass Affluents: the Path to Adoption

Millennials and mass affluent individuals (earn $100,000 annually after taxes) are natural segments to target for payments providers, leading adoption trends in digital and mobile payments and self-proclaimed early adopters for the next wave of payments technology.

More than half of both groups (52%) consider themselves to be among the first to try new technologies. Nearly one-third of millennials (30%) and mass affluents (35%) are extremely interested in initiating payments transactions using wearables (e.g. watch, etc.) or smart devices, such as a refrigerator or car.

“Millennials and higher income individuals may be low-hanging fruit for payments providers looking to increase adoption, but there is also a vast amount of untapped opportunity with consumers who are becoming more familiar with digital technologies and the rewards and convenience it affords,” Flynn concludes.

“As open banking becomes more prevalent, driven by APIs, consolidated customer data will provide a full picture of the customer, giving payments providers the information they need to create unique and differentiated offerings. Winning in mobile payments is anyone’s game at this point.”

While millennials and mass affluents are leading the adoption charge, the survey found that consumers overall are becoming more open to considering digital payments options.

One-in-five consumers are interested in using wearables (21%) or smart devices (20%) to initiate payments, a two and three percentage point increase, respectively, from 2015.

Consumers expressed the most interest in the ability to park their car and have the car automatically pay for parking (30%).Today, nearly one-in-five consumers (21%) are extremely comfortable linking personal data with different ways to pay for faster authentication and one-step checkout, and nearly two-in-five are comfortable providing online bank account credentials to third-parties.